Mr T is working a late shift tonight. He leaves for work just after 11am and returns home around 9pm. This shift makes for a long day for all of us, and today was particularly so. BoyChild did his first full day at preschool, a big achievement for him. So big, in fact, that he was face down, fast asleep when I arrived to pick him up. Bless his little cotton socks. And BabyGirl seems to have forgotten how to sleep at night so her and I are a bit droopy as well.

So, I decided on a nice, easy dinner. Princess had egg soldiers, her “go to” meal (soft boiled egg and toast “soldiers”) 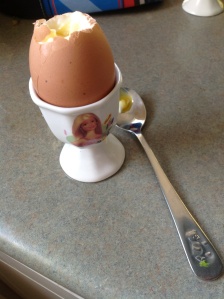 BoyChild and BabyGirl had a various array of food, including potato, mixed veges, egg, toast soldiers and banana. Covers all the food groups, I figure.

Truth be told, I get a little excited when Mr T is on these shifts, because it’s a chance for me to cook something yummy without having to consider whether any one else will like it. Tonight, I cooked Bacon, onion and garlic stuffed baked potatoes with a side salad.

*Cheese (If I weren’t dairy free, I would TOTES have drowned this meal in cheese)

Cook the potatoes – there are a few ways you can do this, the best being a slow bake in the oven (about an hour). I left it too late tonight so I microwaved the potatoes for 15minutes, then put them into the oven for another 10. While they are cooking, fry up the chopped bacon, set aside, then cook the chopped onion, garlic and chilli powder. Combine with the bacon. When the potatoes are done, remove them from the oven and take off the “lid” and scoop out the insides. Put this potato into a bowl and add in the margarine (smoosh those potatoes up!). Add the onion/bacon mixture and combine. Re-fill the potato and put the lid back on. 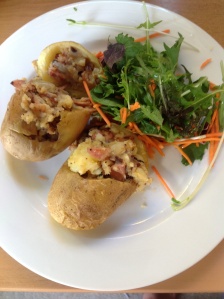 Oh my, this was delicious. I wasn’t expecting it to be as good as it was. I am, as I type this, looking wistfully at my plate and wishing there was more. I think this will be made again. Definite win.

And, because BECAUSE, we are going to have chocolate chip biscuits with melted marshmallows for dessert. 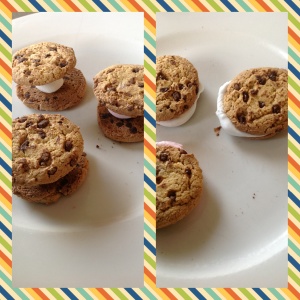 Because, I’m the mum and I said so.