One Pot Pasta. The new “in” thing to cook. Scouring through Pinterest, there are loads of stunning photos with accompanying recipes for this new craze – you cook everything in the one pot, including the DRY PASTA!!! You what?! That’s crazy talk! How could I resist giving it a go?!

Have a look at this stunning photo – don’t these ingredients look a-mah-zing in the pot? 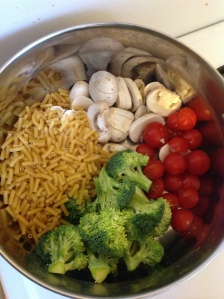 Oh, look at those fresh, yummo ingredients. Mmmmm mmmmm. This is gonna be a cinch! I’m gonna cook this every. night.

Mr T is often telling me I should pay more attention to recipes. I like to wing it, I like to throw things in and hope the hit the target of a nice meal. Most of the time, they do. So, I went into this, guns blazing. I read a couple of recipes and thought, “right. Got the general idea”.

I did not have the general idea.

I put all the ingredients into the pot and covered them with a combination of chicken stock and water. Set it to boil for 10 minutes, checked the pasta. Nearly done. Another 6 minutes. Done.

Well, I’m not sure why I was surprised. It really was a pot of veges and pasta, cooked in the same water. So, they all tasted the same. Not a lot of flavour, just bland boiled veges. Hmmm. Seems I missed a vital point in this – seasonings! Sigh. I divided out some for BabyGirl then tried to rescue the meal by tipping in a can of evaporated milk and some cheese. It made it palatable, though definitely not tasty by any stretch of the imagination. That heavens this wasn’t the only thing I had for dinner. The rubbish bin was well fed that night!

Alas, tonight I decided to be a little less adventurous. I had some trim diced pork and decided to make a pork satay of sorts. I also had lots of fresh veges that I wanted to incorporate. I made up the marinade and had the pork sit for a few hours in the fridge, which made the flavour really nice. 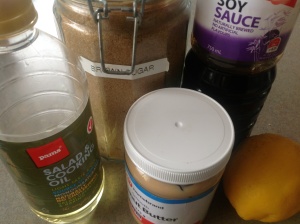 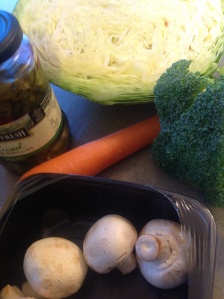 Mix together the ingredients for the satay marinade. Coat the pork and refrigerate for a couple of hours. Dice up the veges and combine with the pork in a deep frying pan. I added a little bit of water at this point to kick of the “steam” effect, then put the lid on the pan and let it simmer. The sauce from the pork seeped slowly into the veges while the water steamed them. Let it simmer away for around 20-30mins. I served it on brown rice (well, beside brown rice, thanks to BoyChild turning off the rice cooker midway through, resulting in the rice cooking much after the rest of the meal). 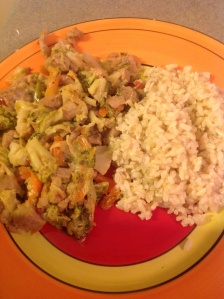 Really, really nice. Good, wholesome food. I chopped up some jalapenos into mine because I really fancy spicy food at the moment. Just a simply delicious meal.

And this, ladies and gents, is why I need to go back to basics. This is the kind of meal I love, and my family love 🙂 On with the show!