Today, this blog was the subject of a conversation on Facebook – a good friend of mine shared it on her page, and someone commented words to the effect of, “why are parenting blogs so negative? Why don’t people write about the good things that happen? It scares those of us who are child-free!”.

I read these comments and thought, fair call! I mean, a lot of my subject matter could quite easily be construed (especially by those who don’t have children of their own) as negative.

Now, I don’t intend it to be negative, and am very careful about not identifying my kids, therefore somehow attempting to protect them against the big bad Interweb. Another friend of mine was a keen and witty blogger about her kids, until a supposed “friend” of hers forced her to discard her blog, by making her feel horrible about “making fun of her kids”. Again, this was absolutely not her intention, but that’s how this (child-free) person read it.

So, my subject matter today – Parenting isn’t all bad. Of course it isn’t. I mean, how can it be all bad, when you have created little people who, no matter what, are completely dependant on you for their everything. This is both flattering and overwhelming. Princess often tells me she loves me, tells her brother she loves him, tells her sister she loves her, yells at them when they don’t say it back …

Children are hilarious. Freaking hilarious. Oftentimes I am literally crying with laughter because of something my kids have done. Their outlook on the world is second to none, and a lot of adults could benefit from taking a leaf out of their books. Small things, like BabyGirl calling my Stepfather by his first name, or saying “Bless you” when I sneezed. Or watching BoyChild painstakingly decide which bush to pee in while we were out today. “I’ll water this garden .. no, this garden .. no, I’ll wees in this garden .. no, this one!”. Or Princess, upon hearing that all plastic containers were 97c at The Warehouse, slipping under all the adults gathered around the stand to make sure we didn’t miss out, and then asking a staff member to please get us a basket for all our containers. And then, turning to me with a huge grin on her face and declaring, “This is SO MUCH FUN, Mum!”.

But, here’s the thing. While it’s fair to say that parenting isn’t all bad, it isn’t all good either. And, one of the main reasons I started this blog, was to allow people to see the other side of things. The side people don’t tend to talk about. That kids, no matter how awesome they seem, still throw tantrums. They are funny and clever and infuriating and awesome and cool and miserable and scary and sad and hysterically happy and hysterically upset. All within one day.

Which leads me to the question – is it worth it?

I love being a Mum. When I think about my kids, I tear up. Like every other mum out there, I get fed up with my kids, but miss them like crazytown as soon as I’m gone. Last weekend, I worked from 11am till 6pm. After my last job I was offered a drink and some food – I declined because all I wanted to do was get home and see the kids before they went to bed. All the way home, I felt myself getting more and more excited about what I would talk to them about when I got home. I walked in the door and was greeted with loud shouts of “MUM’S HOME!!!!!”. Worth it? Hells yea.

So, if you are reading this and you don’t have kids, don’t be disheartened – the good is certainly worth it. If you do have kids, I don’t need to tell you because I’m confident you already know. And you also know, sometimes you have to laugh. Otherwise you cry.

I feel I should throw in here, tomorrow night Mr T and I are spending the night away from the kids, for the first time ever. We have lots planned, mostly centered around sleeping (shush, you dirty-minded people) but I can guarantee a lot of the evening will be spent talking about the kids, reminiscing about the kids, missing the kids.

Because, this parenting gig, it ain’t all bad at all!

“Go on, have three kids. You will barely even notice the third child. Once you have two, you might as well have three!”

Right. Good one. HiLARious. Yes – a good, dear friend of mine told me this after I’d had two kids. Now, she does have three kids (three girls even) so, naturally, I believed her. And then I had three kids. And then, I glared at her. And pointed my finger in her direction. And said, “You. Lied”.

This picture is circulating around social media at the moment. How do I know this? Well, because it has been sent to me. I’ve been tagged in it. It’s been posted to my Facebook page. Three times. 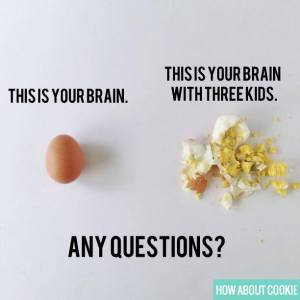 I have three thoughts about this.

1. Yes, that does reflect my brain. Quite accurately.

2. I’m not sure if I should be concerned, or proud, that so many of my friends think of me when an image like this surfaces.

Wait, where was I?

A lot changes when you go from two to three kids. Which doesn’t make sense, because it’s not like you are going from one to two kids. THAT was double. So why, oh why, is this so much more?

My cousin has three kids, and he said to me while I was pregnant with #3, that, regardless of who is home, as long as one child is not there, things will run smoothly. And he is 600% correct. It doesn’t matter what combination is here, things are a lot easier to deal with when one is absent. Again, I’ve no idea why.

Some significant differences you will certainly notice when you go from two kids to three.

1. You simply don’t have enough arms. Or eyes. Or hands. You learn pretty quickly how to watch all three kids at once, no matter how far spread they are. Which can make me appear a bit twitchy – trying to discuss something with a store person while simultaneously feeding BabyGirl in the pram, batting Princess’s hands away from the glass cabinet full of ceramic Fairies and watching to make sure BoyChild doesn’t suddenly scoot out the main door, prepared to drop all and dash if he does.

I have a double pram and it is amazing. Three kids? Get a freakin double pram.

2. Things are much more expensive. Food is more expensive. I had three in nappies for a short while, so obviously that was expensive. But now I have three kids who eat a lot of food. We go through tons of bread and milk. And bananas. A 1kg of minced beef used to easily be split into thirds and frozen but now I’m having to split it in half, or bulk it out with other fillers. Don’t even get me started on takeaways. Three Happy Meals?? And, the kids are still little. I hate to think what it’s going to be like when they are all teenagers. Goodness me.

4. Bigger EVERYTHING. With three kids, you need a bigger house. We have a three-bedroom and I would love a fourth bedroom. Having two sharing is less than ideal, especially when they don’t sleep (see above). We needed a bigger car. Yes, cars have five seats. But a lot of cars don’t fit three carseats across the back. And, do not talk to me about installing the damn things. It has taken a year of practice for me to have mainstreamed the process to under half an hour. But, you can guarantee I’ll be cursing by the end of it.

5. More mess. Three kids. Three ages. Three stages. Three phases. When one leaves a phase, one enters it. Just when you think you can get rid of all the annoyingly noisy toys, the next kid discovers them.

6. It’s takes an eternity to get ready. It’s a wonder I’m not a hermit. You can bet as soon as you finish dressing them all, one needs to pee, one has spilt something, one has lost their shoes and one needs to pee AGAIN.

7. “GEE! You must be BUSY. You clearly have your hands FULL.” *sympathetic pat on shoulder*. It’s three kids, not seventeen for goodness sake. Do I really look that frazzled??

Of course, there are lots of advantages to having three kids. And I’m sure I’ll discover them soon. Just kidding. I adore all three kids, and they certainly have their own personalities. The great thing about three kids is, well, having all three kids. Because I couldn’t pick one to get rid of. Not that I’ve considered it. Often. I love them all, the little monkeys. And I know, I’m very lucky to have them. Princess tells me this regularly.

And, you know what they say – once you have three, you might as well have four. You won’t even notice the fourth. 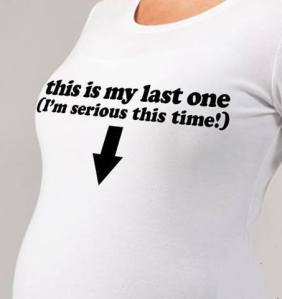 Three is fine, thank you very much.

Doing laundry. Not my favourite pastime, that’s for sure. And, oftentimes I feel like there are people intentionally creating more laundry for me, just so I can’t get ahead with it.

Yes, yes, I know. There are. They are called The Children. In fact, Princess once exclaimed to me, “Mum! Why are you ALWAYS doing the washing?” – while she was shredding literally her fourth outfit for that day. Why indeed, my dear. Why, indeed.

Laundry is certainly a necessary evil, but what are some things you absolutely do NOT want to find as you empty a wet load of washed clothes into the basket for hanging?

This happened to me today. And, it blows. Because anyone who wears a bra knows that those things do NOT go back in successfully. And, Mums who are recently post-breastfeeding like myself will contest that nice bras are most certainly a thing of the past. Satisfactory bras are a rarity as well. And now, I am one less. Which, I’m pretty sure, takes my grand total to two.

This hasn’t happened to me as often as I would have thought it might, but that doesn’t make it any less annoying. When Princess was small, she had a really nice couple of tops that were a lovely shade of blue. They were previously white. Stupid navy blue tshirt.

Some things clearly say “hand wash only”. Now, I’m not pointing fingers here, but it’s very rare that I don’t check the labels before putting the machine on. Just saying.

This is the worst. The actual absolute worst. I’m not talking a dirty nappy here, though that would be horrific, I’m sure. But a disposable nappy. They do not survive a washing machine cycle. Not one iota. They shred and spread little crystals and fluff and goodness-knows-what-else through EVERYTHING. There is nothing more disheartening than opening the washing machine to discover that you need to re-wash that load, not once but many, many more times. Biodegradable, disposable nappies are even worse. Because, you know, they biodegrade!

And there you have it. I realise this post has no grand lesson at the end of it (aside from perhaps, check your washing before you turn on the machine!) but it has succeeded in allowing me to further procrastinate doing my own laundry. I hope I could do the same for you.

You are most welcome.