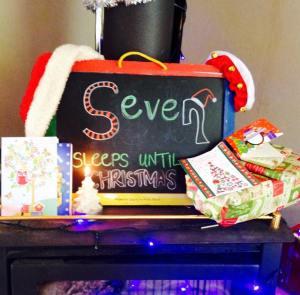 It’s Day Two of the school holidays and, apparently, clothing is optional in our house.

Here in New Zealand, we are lucky enough to have Christmas at Summertime  …

… and so the kids finish school for the year and have 6-8 weeks off before going back in the new year. I’m thrilled. Can you tell?

Yesterday was Princesses last day at school, and today, BoyChild finished up. Last night, they (along with one of their friends) went outside onto the trampoline at 7:30 pm, in the rain, stark naked, for a bounce. My friend and I watched them from the comfort of the living room, perhaps enjoying a glass of wine. It was, after all, the last day of school. Party hard, we said. Go crazy.

And, go crazy they did.

After an hour or so, we brought the reluctant yet saturated kids inside for a bath and into their pjs. Once it was dark enough (9:30pm-ish), we piled into the car to go and check out the Christmas lights on display at other houses. I have to say, kudos to our little suburb, there were some fantastic houses. Naturally, the kids started to doze off in the car but that didn’t stop my friend and I from searching out houses and exclaiming lots of “ohhhhh”s and “ahhhh”s. Some houses were pretty spectacular. And, when we couldn’t find decent houses, we drove down the main street and “ohhhh”d and “ahhhhh”d at the shop displays. Most weren’t so much “Christmas-y” as just the standard lit up display that stores have at night time, but we had fun nonetheless.

I thought that an 11pm bedtime for the kids might have resulted in a sleep in this morning. Ha ha ha, I know, I know. Don’t be ridiculous, Mrs T! Princess was up, bright and shiny, at 8am. By 9am, she was not so bright and shiny. She was tiiiiiiiiiired. Really? You think?

After a long day of desperately trying to keep Princess and BabyGirl entertained (“I’ve got an idea! Let’s go to the Mall”. Said the craziest mother ever), we collected BoyChild from his last day at preschool and came home.

Now, this is no exaggeration – literally immediately as BoyChild walked in the door, his clothes were discarded. “No top, Mumma. No pants, Mumma”. 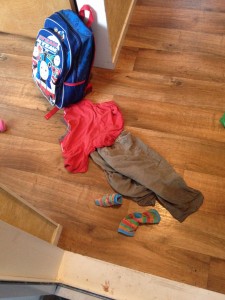 Naturally, it was followed by, “He’s nakey! I wanna be nakey”.

And, before I knew it, I once again had two children, stark naked, jumping on the trampoline in the rain.

I can’t wait to see what Day 3 brings. I’m going to go right ahead and suggest it may have to do with naked children on the trampoline.