A few weeks ago I went away for a weekend by myself, to catch up with friends and go to an engagement party. Yup – two whole nights away. Without kids. By myself.

After they dropped me at the door, I went in, checked in and discovered that my flight was delayed by an hour. That was fine by me – time to sit and have no one talk to me. Until you have kids you have no idea how valuable and exciting that is.

After a good solid minute of sitting by myself, I got antsy and decided to have a look around the shops. A brief visit into the lolly shop and seven free fudge samples later (I thought I better leave before they make me buy something – in my defense, the sign says “free fudge samples” with no limit imposed, so ….) I went into the bookstore. As I was perusing the magazine racks and deciding what tacky, cheap magazine I should buy for the flight, I saw the giant stand of Adult Colouring books.

And I had a great idea.

Instead of reading trashy magazines, what if I coloured on my flight? With titles like “Daydream Colouring” and “Calm colouring for dreams”, how could I not feel relaxed and calm at the end? It’s colouring, but for grown ups. Wow. Neat. Practically meditation. Yoga for my fingers.

I bought a little, purse sized book and a pack of coloured pencils, and proudly put them into my bag. They were my prized possessions, neatly tucked away in my handbag until I was on the flight. I was excited, I won’t lie.

As we were finally boarding the flight, the boarding staff mentioned that there was “extreme” weather at our destination, so to expect some bumps.

That’s ok. I’ve flown in turbulence before. How bad can it be?

Within a few minutes of the flight I was clutching my seat (and, at one point, the knee of the kind elderly gentleman beside me) and imagining what Mr T and the kids would be like without me as I plummet to my untimely demise on this here flight. And then smiling ironically, imagining them describing me in the media as a calm person, obvious by the colouring book and pencils neatly stowed in my handbag.

After a decent half hour of what I swear was the plane dropping from the sky at a million knots, I decided it was time to start colouring. Because, it would make me calm. I needed calm.

Now, I ask of you – have you tried to colour in small, intricate details while flying in a small aircraft falling from the sky at a great speed? No? Well, I have. And it is not easy. In fact, it sucks. I kept going over the lines, and dropping my pencils. My peacock was looking ridiculous. In fact, during one moment of particular concentration, the plane dipped and I might or might not have said, out loud, “oh come ON!”. Again, apologies to the man beside me.

After a while (truth – it was probably only ten minutes) I decided to put the book and pencils away. Call it a day, so to speak.

The next day, I proudly showed anyone and everyone my colouring book. I mean, to be honest, I had to take the pencils and book out of my handbag any time I wanted to use my wallet, but as I placed it on every table and counter top, I felt as though I was just oozing calm and day dream-ness. “She’s so calm” people were thinking. I know they were.

The next morning, I was ready to head home. Ready? Well, I was heading home. As I boarded my flight (onto a much bigger plane, on a considerably calmer day), I was brimming with excitement about spending the next hour deep in the calm and deeply immersed in my colouring book.

After a smooth take off, I brought out my book and pencils and started on another picture. I was doing great and … dammit Pilot! I swear, he was watching me and bumping the plane as soon as my pencil was precariously perched above the paper. Deliberately. Wait, this colouring book is meant to calm me, not delve me into paranoia!

And I learned a valuable lesson.

I am not a colouring book, calm, daydreaming kind of person. I should have known. I’m not a yoga person, or a tai chi person.

I’m a crazy, chaotic person. I love my crazy kids, and my crazy chaotic life. I think I’ll stick to my usual calming down routine – trash telly and the internet. That’s how we roll in 2015.

And, to win extra points with the kids – I had an extra special, super great present especially for Princess when I got home.

A really neat, awesomely cool colouring book and some pencils. AND I even started a couple of the pictures just for her. 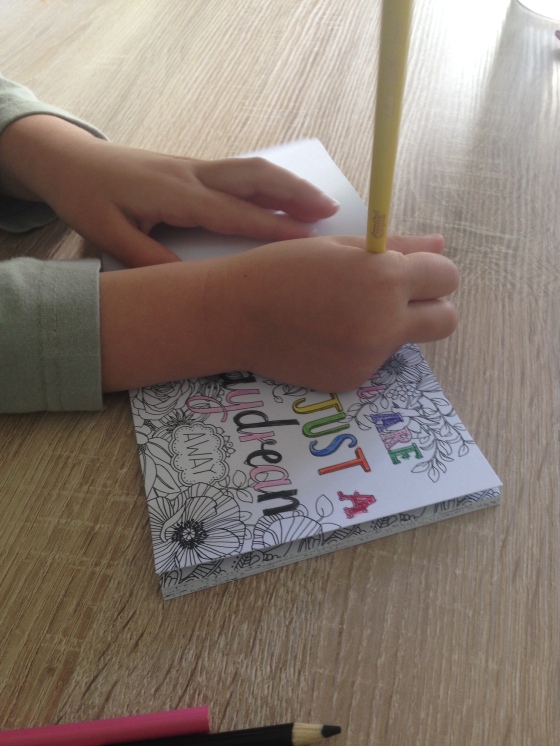 Because I’m “the best mummy EVER!”.

2 thoughts on “Adult Colouring. It’s not for me.”