And here we start our basic food. I went to the supermarket today and tried not to buy pre-made food. Surprisingly (or not!) I came in well under budget. We may make that up later in the week though as things run out.

For dinner tonight I am making fish cakes with a spinach salad – I asked Mr T what he would like, what food he remembered from his childhood that he really liked. Fish cakes it is.

Parsley (I will use Oregano because it’s what I have)

Butter (the recipe calls for butter but since BabyGirl is dairy-free, we will use margarine)

Spinach, tomato and grated carrot as a side salad for me, broccoli for Mr T and the kiddles

Peel and halve potatoes and boil them in a pot until they are nearly tender.

Add fish to the pot and let them both cook until they are soft.

Drain well and put into a large mixing bowl. Add margarine, onion, egg and herbs (I’m using Oregano because it’s there) and mash together.

Shape into patties. Add breadcrumbs if you so desire.

Cook in oil on a frying pan over medium heat until they are golden brown on both sides.

Verdict? Pretty tasty! 4 out of 5 empty plates at the end of the meal, though getting BoyChild to eat anything at the moment is a task-and-a-half so I declare this one a win. Will definitely be doing it again. 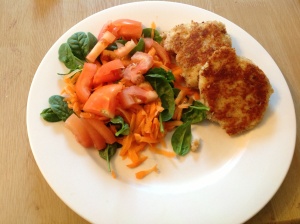 Notes: You can probably get away with using any fish. Canned fish would work well and is a much cheaper option. I’m not a “fish” person so cooking with fish is a new experience for me. I’m a bit of a Fish Noob, you might say.

These would be delicious with sweet chilli sauce as well